Barefoot Wines and the Surfrider Foundation have partnered to present:

Posted by Gregory Fearon at 12:46 PM No comments:

Last May, California announced plans to close one quarter of their 278 parks, a devastating move that is intended to save the state a mere $22 million per year. The closure list includes thousands of acres of park land, recreation areas, wildlife reserves, and 50% of the state's historic parks. By July 2012 Californians will be bereft of 70 magnificent natural parks. The media has done little to disclose the ongoing closures or emphasize their impact.

Not wanting to miss the chance to see these places before they were gone forever, we decided to make our way across California in a converted airport shuttle bus, shooting as many parks and people as possible. Individuals we met along the way were concerned about the closing of their local parks, but no one had a collective firsthand experience of the overall picture. As we connected dots on a map, a pattern emerged. No one knew exactly what the conditions of closure would be, nor could they see how the state would ultimately benefit.

The First 70 is a short film about Californians banding together to enact change and develop solutions in the face of a glaring bureaucratic oversight. Volunteers have been forced to lend even more of their time and effort to support the already grossly underfunded state park system. Independent organizations and nonprofits have become obligated to step up to the challenge of keeping parks open, supporting them financially while working within the state's guidelines.

These photos were taken on California's Coastal Cleanup Day, organized by Coastwalk California, on the coast of Sonoma County on September 17th, 2011. Coastwalk wants to thank Whole Foods and REI for their partnerships, and a special thanks to Redwood Empire Boy Scouts, Sonoma State University, and the Ecclesiastical District of Northern California. 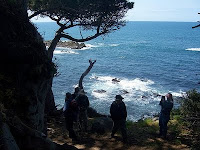 I'm angry at the California Citizens Redistricting Committee. For the past 40 years, I have lived in Marin and Sonoma Counties along the 101 corridor. In every election, I have voted for candidates whose districts included the Northern California coast, and who paid attention to its issues. When I lived in Marin, I was sometimes represented by politicians from Sonoma. The reverse was also true. But grew to understand that, though each county's residents viewed the others suspiciously, they all shared a love of the coast and voted for candidates who protected it well.

The Committee released its new redistricting maps yesterday, and disenfranchised the coast from most of Sonoma County's residents along the 101 corridor. In some or all of the cities of Santa Rosa, Rohnert Park, Cotati, and Petaluma, residents will now be voting for candidates for state or federal offices who have not one foot of Sonoma County coast in their districts. The political views which will be debated in those races will turn an about face from the coast and Redwood Empire to the Napa Valley and the Vallejo Hwy 80 corridor. Issues such as marine sanctuaries and coastal access will be replaced by port facilities and highway interchanges.

I don't think Sonoma County residents will like being moved to the inland empire. And I'm hoping they will show their love of the coast by electing strong environmentalists to the whichever political offices remain representing stretches of the coast. The 2nd and 10th Assembly Districts include the Marin and Sonoma coasts, and every resident except those in Rohnert Park and those along Hwy 12 from Kenwood to Boyes Hot Springs. The latter group is included in the 2nd Senate District which covers the Marin and Sonoma coasts. Unfortunately, residents of Rohnert Park have no representatives of any coast. And the coast loses federal representation in the 2nd Congressional District from most all of Santa Rosa, Rohnert Park, and Cotati residents.
Posted by Gregory Fearon at 11:27 AM No comments:

Yesterday, I joined the members of the Mendocino Coastwalkers for dinner. I drove up from Santa Rosa to Van Damme State Park where they were spending the last night of the hike, and was able to take some of their time to describe Coastwalk's entire program activities, and listen to their feedback.

I was able to show them the new website, and they had plenty of useful ideas about improvements to it and to Coastwalk operations.

Posted by Gregory Fearon at 4:25 PM No comments:

Geocaching on a Coastal Scenic Trail

Fran Gibson, Coastwalk's recent Past President of the Board, sent me a link to a great article about an effort by the Great Lakes Seaway Trail to engage geocachers in the promotion of and use of their coastal resources.

For those of you headed to Portugal, here's another good resource for touring the coasts of that country:

Gregory
Posted by Gregory Fearon at 12:17 PM No comments: