Coastal Protection at Torrey Pines in 1929 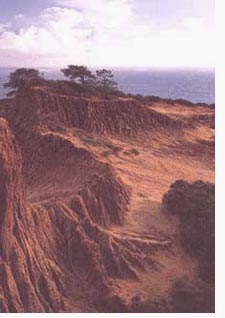 One of the first battles to save the California coast from the pressures of a development occurred in 1929 when local commercial interests urged building a high-speed highway through Torrey Pines City Park.  The proposed road was designed to bypass a narrow, winding grade which created a bottleneck on the major thoroughfare between San Diego and Los Angeles.  One scheme called for blasting away 1,700 feet of sea cliff for a straight, more gradual right-of-way from the beach to the mesa top.  Debris from the cutting in the new alignment was to be dumped onto the public beach.  One scenic canyon was to be crossed on an embankment of fill, and another spanned by a bridge. 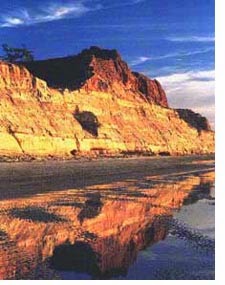 Opposition to this proposal was led by The League to Save Torrey Pines Park.  Its members felt the best solution was to build a new road to the east via Sorrento Valley, skirting Torrey Pines altogether. In a brochure that addressed numerous reasons for preventing the road, the League answered its own rhetorical question, "Is the danger to the Park very pressing?" with the following blast: "So pressing that only an immediate and emphatic expression of public disapprobation can save the heritage of the people from a defilement which will bring upon its perpetrators the condemnation of generations yet unborn."  A compromise was reached in 1930, and a grade (old Highway 101, now North Torrey Pines Road) was cut through the upland instead of along the cliffs.  The region's modern freeway (Interstate 5) was eventually built east of Torrey Pines, following the route favored by the League 40 years earlier.

Follow the current efforts to protect the coast and continued access to it at the following websites:

Posted by Gregory Fearon at 2:53 PM No comments: