From Big Stump to the Stumptown Days Parade 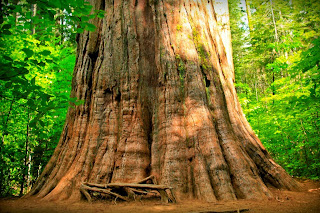 Last week, a group of staff and board members from Stewards of the Coast and Redwoods traveled to Calaveras Big Trees State Park to meet with their counterparts. We have ambitions of remodeling the Jenner Visitors Center, and building a new facility at Armstrong Redwoods State Reserve.  With one-fifth of our million park users, their new Visitors Center generates five times our current gross revenue.   Their capital campaign dwarfed even our most optimistic goals.

I was very impressed by the quality of the sharing and organizational connections.  Key personnel, with decades of experience supporting educational and resource protection programs in a park containing a huge concentration of California's largest and oldest trees, talked all afternoon and evening about what lessons they had learned.  The combined personnel are responsible for almost three thousand trees which were alive when Sir Francis Drake arrived on California's coast.  The combined height of these trees in these two parks would reach four times beyond the orbit of GPS satellites, and they'd weigh more than all the whales in the world.

But volume is not the value of these giants.  The experience of walking among them gives us an incomparably important environmental perspective, and brings to our understanding our impact on the world.  One example is a six foot high stump near the entrance to the North Grove at Big Trees, upon which was once constructed as a dance floor.   It has been postulated that had it not been cut down early in the last century, that it would have grown to become the tallest tree in the world.  Walking along the length of its supine trunk, and in the caverns of its fallen body, few cathedrals which man has built can compare to its reverence.

Our group gained valuable perspectives from the extended conversations that day.  In these times of state budget cuts and the feared abandonment of California's natural and cultural resources, it is crucial that those working to reverse the tide communicate well together.  We will continue our discussions long after our return to Sonoma County, and our actions on behalf of the resources under our care will be improved as a result of the interactions.  Our thanks to the Calaveras Big Trees Association Board and Staff for opening their hearts and home to us.  They are welcome in ours anytime.

Today, the work of Stewards continued with our participation in Guerneville's Annual Stumptown Days Parade.  Board, staff, community members and their children marched beside our new StewardShip, puppets and drums in hand, and passed out flyers describing our upcoming programs and events.  As I waited at the front of the parade line watching our own Mother Nature, Elizabeth Vega, rehearse the volunteer children in their drumming routines, I wondered about how many dance floors in San Francisco were born from trees that once surrounded this town.

Posted by Gregory Fearon at 7:27 PM No comments: