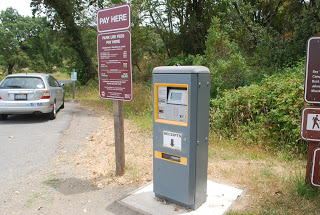 For the past year, local staff of California State Parks have been meeting with representatives of Coastwalk California, Sonoma Coast Surfrider, Stewards of the Coast and Redwoods, Sonoma County Conservation Action, and Sonoma County.  Following the decision by the California Coastal Commission last year to take jurisdiction over a proposal to install automated pay parking machines at locations along the Sonoma Coast, the Commission ordered State Parks to meet with stakeholders and the public to improve the permit application.  On Wednesday, Feb 17th, State Parks is inviting the public to participate in a community meeting from 6:30-8:00pm in the Sebastopol Community Center at 490 Morris Street in Sebastopol, where their latest proposed plan will be presented for comments.

First, let me say that I have appreciated and admired the work of local state parks staff in the development of their latest proposed plan.  It has not been easy for them to both respond to their legislative mandate to increase revenue from park users, and to solicit and incorporate the advice of advocates of coastal access who believe that parking fees will inhibit that access.  Nevertheless, the latest proposed plan being revealed demonstrates that they have listened.

I continue to advocate that the maintenance and operation of California's parks should be financed by the broader California public and the state general fund, and that the barrier presented by imposing parking fees on Sonoma's coast violates the coastal public access requirements of California's Constitution.  While the latest proposed plan includes new efforts to remedy the economic hardship imposed on Sonoma's poorest residents, cuts in half the number of installations, uses staffed kiosks in three key parking areas, and promises to use the revenue to improve the services delivered by State parks on the coast, it does not go far enough to convince me that significant numbers of Californians will not barred from their coast.

Hope to see and talk with you all at the meeting.